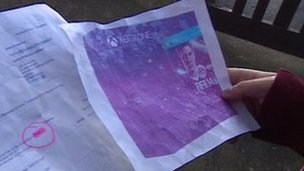 A man paid £450 online for an Xbox One but received only a grainy photo of the console in the post.

Peter Clatworthy, from Nottingham, bought the item from eBay despite noticing it was described as a "photo" in the listing.

A spokesperson for eBay said the listing was misleading and the seller has been banned from using the site.

The student, who has now got his money back, wanted to buy the console for his four-year-old son for Christmas.

He told the Nottingham Post he had been "in two minds" about buying the item because it said "photo", but was also listed in the video games and consoles category.

He told the newspaper: "I always buy stuff on eBay and this had never happened before.

"I looked at the seller's feedback and there was nothing negative. I bought it there and then because I thought it was a good deal." 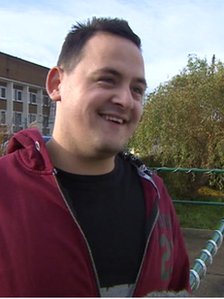 Peter Clatworthy said he "had to laugh" because it was his own fault
'Very slim'
He told the BBC he was "flabbergasted" when he received the photo in the post.

"I was expecting the Xbox to a bit more bulky than it was," he said.

"It was very slim and I had a look and I thought 'I've been conned out of money here'.

He then contacted the seller to complain.

"At first I said 'Ah ha, very funny', and he got back to me and said 'You got what you bought'," said Mr Clatworthy.

A spokesperson for eBay said they were able to retrieve the money before it was transferred to the seller's account.

"Customers can shop with confidence on eBay as we guarantee you will get your item or your money back," they said.