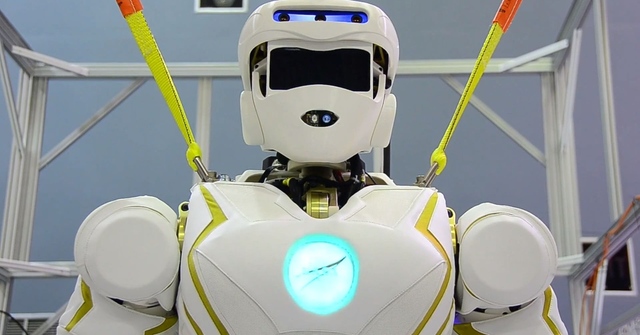 21
inShare
NASA has created a robot for DARPA's upcoming Robotics Challenge Trials. The Valkyrie is a 6-foot-2-inch humanoid machine with detachable arms, sonar sensors, mounted cameras, and a glowing Tony Stark-esque circle in the middle of its chest. The space agency says it's mobile and dexterous enough to enter disaster zones to provide search and rescue functions.
Project and group lead for NASA JSC's Dextrous Robotics Lab, Nicolaus Radford, tells IEEE Spectrum that Valkyrie was designed specifically for the DARPA competition. Strong legs mean the robot's capable of moving around "degraded environments" typical of disaster-stricken areas, and cameras mounted on its head, body, forearms, knees, and feet, allow it to provide visual information back to its handlers. Extra data can be provided by the robot's sonar and lidar units. Unlike DARPA's own Atlas robot, Valkyrie doesn't require a tether, running instead on a 2kWh battery stored on the machine's back.

Valkyrie builds on the space agency's previous humanoid robot, Robonaut, currently in orbit around the Earth in the International Space Station. Robonaut, built to work in zero-gravity environments, was the size and shape of a bulky humanoid torso. Valkyrie's powerful legs and lighter frame make it better adapted for operating on Earth, and a modular construction means the robot's arms can be switched by humans "in a matter of minutes."
In addition to the robot's practical uses, Radford explains how his team was focused on creating an "awesome"-looking machine. Important in that design was a more humanoid aesthetic than most of NASA's competitors in the DARPA challenge. Valkyrie looks, moves, and even dresses like a human, wearing layers of fabric over its metal limbs. The fabric helps protect Valkyrie from falls, but Radford explains another reason for its material outerwear. "Our robot is soft. If you brush against it while you're working, you don't want to feel this cold, hard metal. You want it to feel natural, like you're working next to another human being."
NASA was focused on creating an "awesome"-looking robot
NASA previously funded another "Valkyrie" project: a "cryobot" built by Stone Aerospace to use a laser to cut through Alaskan glacier ice ahead of a mooted mission to Jupiter's moon Europa. This new Valkyrie's duties are earthbound for now, to conform to DARPA Robotics Challenge guidelines, but Radford says NASA's aim is Mars, and than "these robots will start preparing the way for the human explorers."
First, though, Valkyrie has to perform against the DARPA Challenge's other robots on December 20th. Impressively, Valkyrie was designed and built by NASA in only nine months, two weeks of which were lost to the US government shutdown. Fifty-five people worked in shifts to keep the "Bunker" in which it was created open from 7AM to 5AM. Despite the "insane" build time, Radford is confident Valkyrie will be able to perform the potentially life-saving actions DARPA is demanding, describing his team's creation as a "superhero." That tag might also explain Valkyrie's Iron Man-style chest light. As Radford says, "if it's worth doing, it's worth doing cool."
surce:THE VERGE
Autor: Sylvi Wyszynska o 08:46