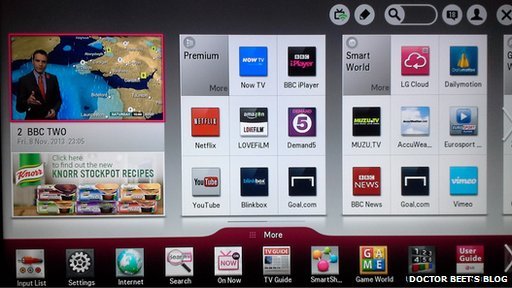 LG has admitted it continued collecting data on viewing habits even after users had activated a privacy setting designed to prevent it.

The television maker has apologised to its customers and told the BBC it would issue an update to correct the problem.
UK-based IT consultant Jason Huntley, who raised the issue in a blog, welcomed the "positive step".
Viewing information helps manufacturers deliver relevant advertising and programme recommendations.
"I hope that their future products will reflect this decision and keep customers clearly informed as to their data collection practices before they take place," he said.
LG launched an investigation in the wake of his blog, which was reported widely in the media.
'Not personal data'

"We have verified that even when this function is turned off by the viewers, it continues to transmit viewing information, although the data is not retained by the server," LG said in a statement.
"A firmware update is being prepared for immediate rollout that will correct this problem on all affected LG Smart TVs so when this feature is disabled, no data will be transmitted," it added.
Since the issue became public it has emerged that Sony's PlayStation also collects data from every Blu-ray disc that is played.
Samsung, the world's largest TV maker, is yet to respond to questions about its operations.
LG stressed that the information gathered was not personal but viewing information.
"This information is collected as part of the Smart TV platform to deliver more relevant advertisements and to offer recommendations to viewers based on what other LG Smart TV owners are watching," the firm said.
source:BBC