Accenture: Preference for watching TV shows on televisions plummets from 52% to 23% as PCs take over 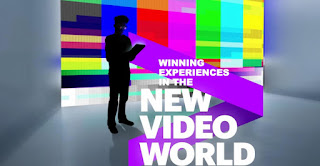 The percentage of people who prefer watching TV shows on televisions plummeted 55 percent from 52 percent to 23 percent in the past year, according a survey by Accenture.
Laptops and desktops have overtaken TVs as the preferred devices for watching TV shows, according to Accenture’s 2017 Digital Consumer Survey. That’s an astounding change in sentiment in just one year, and it reflects a years’-long trend toward digital “anytime, anywhere” viewing. Accenture released the survey at the start of the National Association of Broadcasters (NAB) show in Las Vegas.

Above: TV show watching on TVs has plummeted.
Image Credit: Accenture
The global online survey of 26,000 consumers in 26 countries revealed that consumers increasingly prefer to watch TV shows on devices such as laptop and desktop personal computers and smartphones. More than four in 10 consumers (42 percent) said they would rather view TV shows on a laptop or desktop, up from 32 percent in last year’s survey. Thirteen percent said they prefer watching TV shows on their smartphones, compared with 10 percent last year.
The decline in TV viewing over the past year is part of a four-year trend. As recently as 2014, the survey revealed that nearly two-thirds (65 percent) of consumers preferred the TV set for viewing TV shows.

Above: Computers have overtaken TVs for watching TV shows.
Image Credit: Accenture
The most recent findings show that only one in five consumers (19 percent) now prefers to watch sports games on their TVs, down from 38 percent in the prior-year survey.
“The dominance of the TV set as the undisputed go-to entertainment device is ending,” said Gavin Mann, global managing director for Accenture’s broadcast business, in a statement. “While a great number of people still watch plenty of TV shows on TV sets, our research uncovers a rapid acceleration in their preference for viewing on other digital devices — especially laptops, desktops, and smartphones.”
In India, the trend was very sharp. The percentage of Indians who watch content on TVs dropped 78 percent — from 47 percent to 10 percent. In the U.S., the number fell 57 percent (from 59 percent to 25 percent), and in the U.K. it dropped 55 percent (from 56 percent to 25 percent).
“Driving this rapid shift in consumer preferences is the growing convenience, availability, and quality of more personalized and compelling content on laptop and desktop personal computers and smartphones,” Mann added. “The massive and accelerating push by communications and media companies to provide ubiquitous content — TV everywhere, including over-the-top — has empowered consumers to access high-quality content across multiple devices.”
While consumers increasingly prefer to watch TV shows on laptops and desktops, the smartphone is becoming the preferred device for watching short video clips. In the most recent survey, more than one-third (41 percent) of consumers said they would rather view these clips on their mobile handsets, a substantial increase from 28 percent last year.

Above: Smartphone viewing of TV shows is on the rise.
Image Credit: Accenture
Meanwhile, the number of consumers who said they would rather watch video clips on their laptops and desktops dropped slightly, from 47 percent to 44 percent over the last year, while the number who said they prefer to view these clips on their TV sets dropped even more, from 16 percent to only 5 percent.
The report recommends that media companies should respond by identifying new ways to engage consumers with more personalized video content across more types of screens. It also says media companies should use granular consumer data, segments, and predictive analytics to help anticipate consumer preferences and find content they desire. And it suggested that companies focus more on their target audiences to identify exactly what content their viewers want to receive.
Autor: wizdom o 14:33