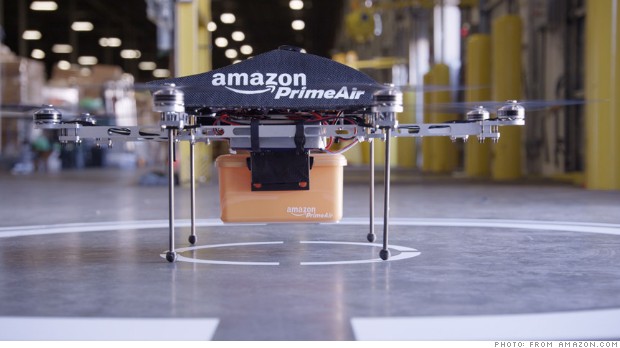 Amazon says it is testing drones for use in a new delivery service.

In the not-too-distant future, Amazon deliveries could come by air directly to your doorstep.


The "octocopters" aren't ready to take flight yet. Amazon CEO Jeff Bezos said in an interview on 60 Minutes that the drones would be ready to take flight in four to five years. But an Amazon spokesperson pointed to an updated post on the company's website promising aerial deliveries as soon as federal rules change.

Those FAA rules could come as soon as 2015. The type of flights Bezos proposed are currently not allowed. Unlike some other drones currently used, these would be autonomous -- they would fly without a pilot.
Related: Amazon employs postal service to deliver on Sundays
"I know this looks like science fiction. It's not," Bezos said in the CBS interview. "It drops the package. You come and get your package and we can do half-hour deliveries."

Yes. Amazon is overvalued. So?

https://news.google.com/
Bezos said the drone models Amazon (AMZN, Fortune 500) is currently testing have a range of 10 miles and can handle products under five pounds, which is nearly 90% of the company's offerings.
"It won't work for everything," Bezos said. "We're not going to deliver kayaks, or table saws this way."
Amazon has long used innovative delivery strategies to gain an advantage over other retailers. Its warehouses, called fulfillment centers, are famously efficient. The company was also quick to recognize the promise of free shipping on larger purchases, and its Prime service now offers free shipping for a flat annual fee.
Related: Domino's tests drone pizza delivery
Other companies including pizza chain Dominos (DPZ) have floated the idea of using delivery drones.
All have to consider what Bezos described as a key concern: "This thing can't land on somebody's head while they're walking around their neighborhood."